Skip and go directly to the main content
21 november 2014

Ook elders in Engeland leeft de nagedachtenis aan Coba Pulskens voort. In januari 2009 kwam op de site ‘thenorthernecho.co.uk’ het volgende verhaal over twee oude Engelse penny-munten bewaard door Vicky Godfrey, die als kind gedurende de oorlog in Holland woonde:
‘They are only two old pennies. Nothing special to look at, the same as millions of others to be found in homes up and down the country. But for all their faded simplicity they are a tangible link to a moving story of courage and sacrifice in the dark days of the Second World War. They have just been given to Eden Camp near Malton, North Yorkshire, a former PoW camp that is now a wartime museum, by Dutch pensioner Vicky Godfrey.
Now living in England, Vicky was a child in occupied Holland during the war and the pennies were given to her by her father. He acted as a courier for the evasion lines that smuggled downed airmen back to the safety of Allied territory, and Vicky would collect English books for the escaping aircrew to ease the long hours of inactivity while they hid in safe houses.
The coins were given to her father as a gift for Vicky from British airmen who were hiding in the Tilburg home of a 60-year-old widow, Jacoba Pulskens, who ran a grocery shop.
In July 1944, Mrs Pulskens, known as Coba, had three flyers hiding in her home on Diepenstraat – among them Flying Officer Roy Carter, still on the run after his Croftbased Halifax had been shot down the previous month. As the three ate their Sunday breakfast, the Gestapo raided the house, bursting in through the door. The three unarmed officers were herded into the backyard, lined up against the wall and shot numerous times. FO Carter was badly wounded, but managed to get back into the house where he was killed in the doorway leading to the kitchen.
For Mrs Pulskens it was not so quick. The Gestapo ordered her to fetch a sheet to cover the bodies and in an act of defiance she used a new and large Dutch flag – which was banned by the Nazis. She was arrested, interrogated and spent seven months in solitary confinement before being taken to Ravensbruck concentration camp, where she died in the gas chamber in the spring of 1945, aged 61.
Monuments to her memory have since been erected in Tilburg and the flag she used hangs in tribute to her at RAF Coningsby, in Lincolnshire.
The ten men responsible for the atrocity were tracked down by the British after the war. Four were hanged. Eden Camp director Nick Hill said: “Mrs Godfrey used to keep the pennies on her wall for many years but asked if we would put them in an exhibition.
They are plain and simple objects, but they mean so much to so many.”

En al langere tijd op internet, op de site van ‘bombercrew.com’, wordt het gebeuren bij Coba Pulskens weer in andere bewoordingen beschreven:
'The three airmen were having breakfast in preparation for their escape to Belgium and then to one of the `freedom lines`.
Against all principles of the Geneva Convention concerning POWs, the Gestapo burst into the room and herded the 3 officers into the backyard, lined them up against a brick wall and shot them numerous times, despite the fact they were unarmed. Roy was badly wounded but was able to get into the house. He was killed in the doorway leading to the kitchen. (The doorway was pointed out to his mother, years later (1964) when she travelled, accompanied by her daughter Isabel, and along with other `Silver Cross` mothers, to Holland on a pilgrimage).
The S. D.(Sicherheitsdienst or Security of Den Bosch)/Gestapo now ordered the 60 year old Coba Pulskens to fetch a sheet to cover the still-warm bodies. In an act of defiance she went upstairs and brought down a new and large Dutch flag, which she had been keeping for the day when the Netherlands would be liberated from the barbaric occupation of the Nazis (radios and Dutch flags where forbidden in occupied Holland).
It should be noted that Coba lived on a busy street corner and all of this action was being witnessed by neighbours, many to be called later to the trial of the murderers. Coba herself was arrested, spent seven months in solitary confinement and then carted off to the notorious Ravensbruck concentration camp where she died in the gas chamber in the spring of 1945 at the age of 61. She is remembered as a heroine in Holland and England. According to survivors in the death camp, she had voluntarily stepped forward to take the place of a young mother, with children, in the hope of saving their lives.
She apparently had said earlier. `If someone has to give his life, I hope to do it. I can better be missed than others` 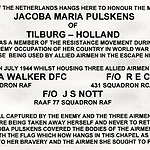